Lost Colonies is an imaginative, immersive live-action roleplaying community for individuals aged 16+ and for families with teens 13+, in the DC, Maryland, and Virginia area. Create your character and join other players in a world of exploration and discovery for weekend-long expeditions, or one-day adventures in the newly discovered land of Torakand. We are a friendly, supportive place to learn to larp and we welcome players of all experience levels to join us. 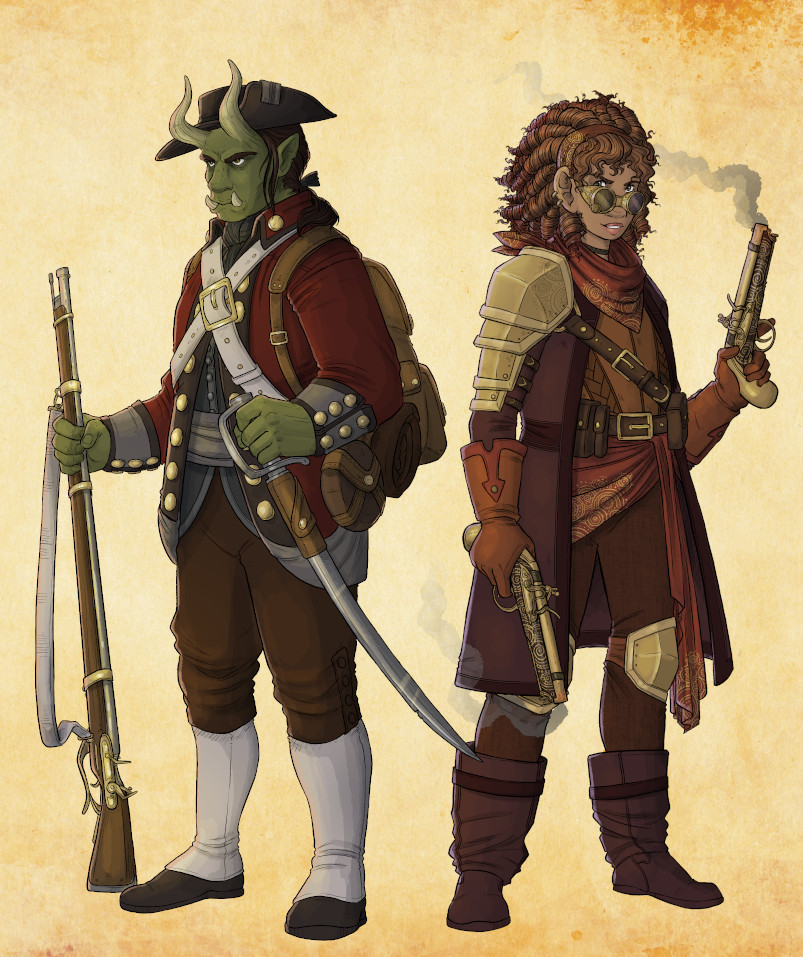 What is Lost Colonies?

It is very important to say up from that we are not an alternative history larp.

Rather, we draw inspiration from both history and fantasy to present a wholly new world that enables the players to get what they want from the larp experience. We feature combat, crafting, exploration, lore, medicine, merchanting, and more. You are invited to wear costuming that dates anywhere from around 1300 to around 1700 and to draw inspiration from anywhere in the world. Your character is from a large, diverse continent called Sobukand, with regional lore to help you build your cultural roleplay and inform your costuming. If you don’t find exactly what you want in existing lore, talk to the Directors and Storytellers about your ideas and we will help you get to a concept you love that works with our world. 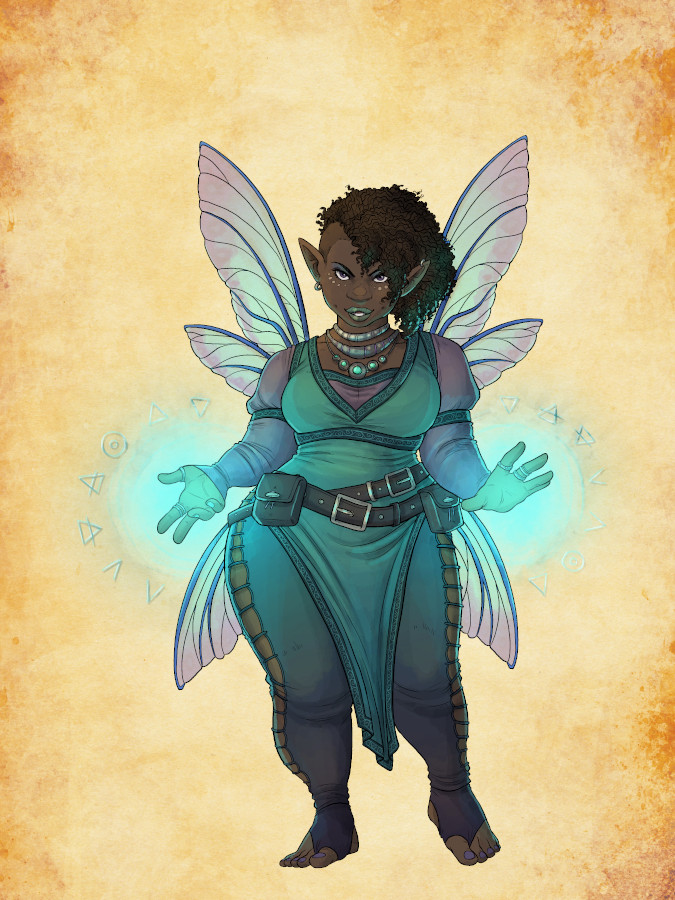 We run up to four full weekend events per year, which are held on a cabin campground near Frederick, MD and run Friday night through Sunday. Tickets are $50 for first-time attendees, $75 for regular attendees, and $10 to play a full-time NPC. Included with these events are five meals, each with omnivore, vegetarian, and gluten-free options. We also have trained safety and emergency medical staff on site. All players also spend 4 hours playing NPCs for us at these events. We make playing an NPC fun, and we respect your combat or non-combat status when assigning roles. We run several one-day events throughout the year in MD and VA, both in character and out of character. These include workshops, family-friendly festivals, combat practice, and the Annual Governor’s Dinner, a fancy dress pot-luck. One-day event prices vary, but are always reasonable. 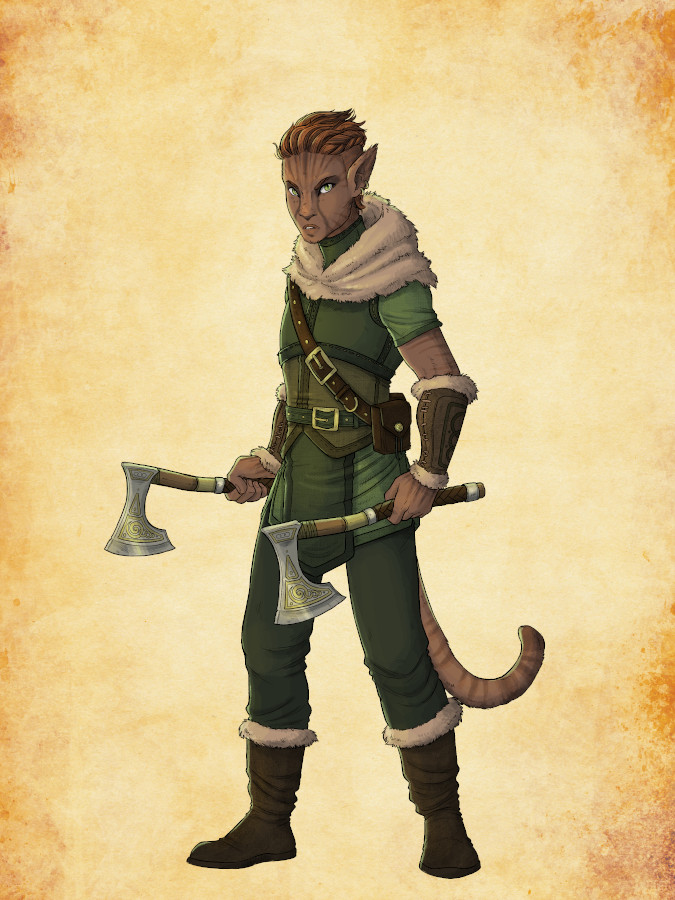 We generally aim to make Lost Colonies content PG-13 in nature. When we have specific topics or creatures that may cause distress we will do our best to provide content warnings. You are always welcome to ask a Storyteller or Director about specific content that may be a concern for you, and we will always share any relevant information. Lost Colonies will never tell stories of oppression, slavery, or sexual assault.

We work to provide a rich experience for players of all levels of physical ability. We provide combat and non-combat content in approximately equal measure and guarantee non-combat zones at every event. We will never conduct raids into sleeping areas.

In spite of our efforts, some of our campsites may not be fully accessible to everyone. If you have mobility concerns, please let us know and we will provide you as much information as we can so that you can make an informed decision. Further down this page we have a video of our main campsite to give you a walk around with an eye towards accessibility. 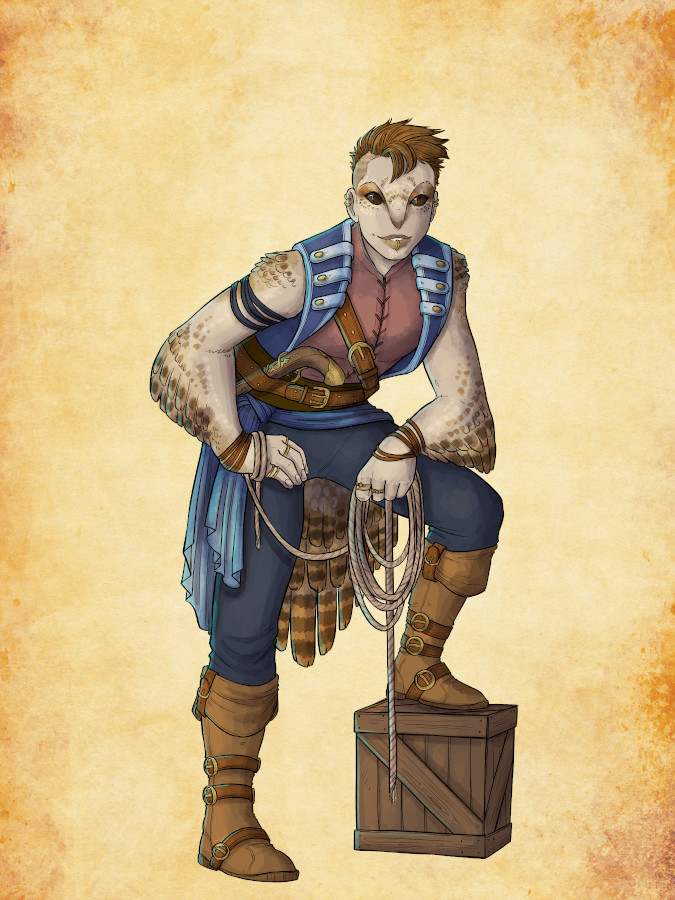 We aim to provide a rich roleplay experience that allows players to make meaningful choices and then deal with the consequences. To that end, we have established an Injury, Scar, and Death system that allows characters to get into life-threatening situations and live to tell the tale. You are in control of your own character’s story arc. Death may be permanent, but it will be a good story getting there.

Combat is conducted using lightest-touch methods, with foam latex weapons, bean bag spell packets, and Nerf-style guns. We do not allow boffer archery, Nerf mega darts, or Nerf rival rounds. We strongly encourage that combat be both theatrical and safe.

Rituals, crafting, and other economic systems have recipes that can be followed, but also allow for experimentation. Sometimes experiments will only work for one situation, other times they can be refined until they become standard recipes to be permanently included in the world. 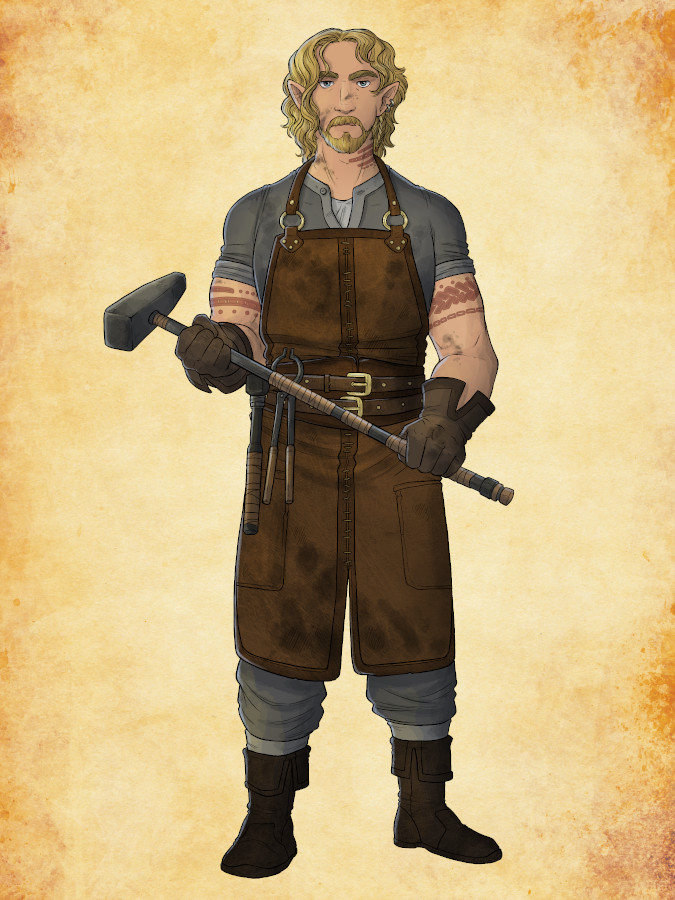 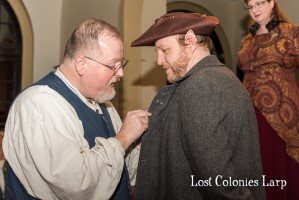 The Regional Governor, Marquis Cornelius Bixby, applying the medal signifying promotion of July Cullens to the rank of Colonel. 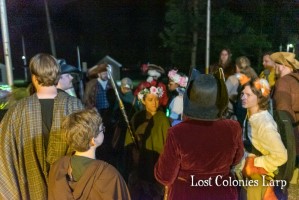 The folks arrived in Leyton and found it apparently abandoned. Here they gather before heading to search for the inhabitants. 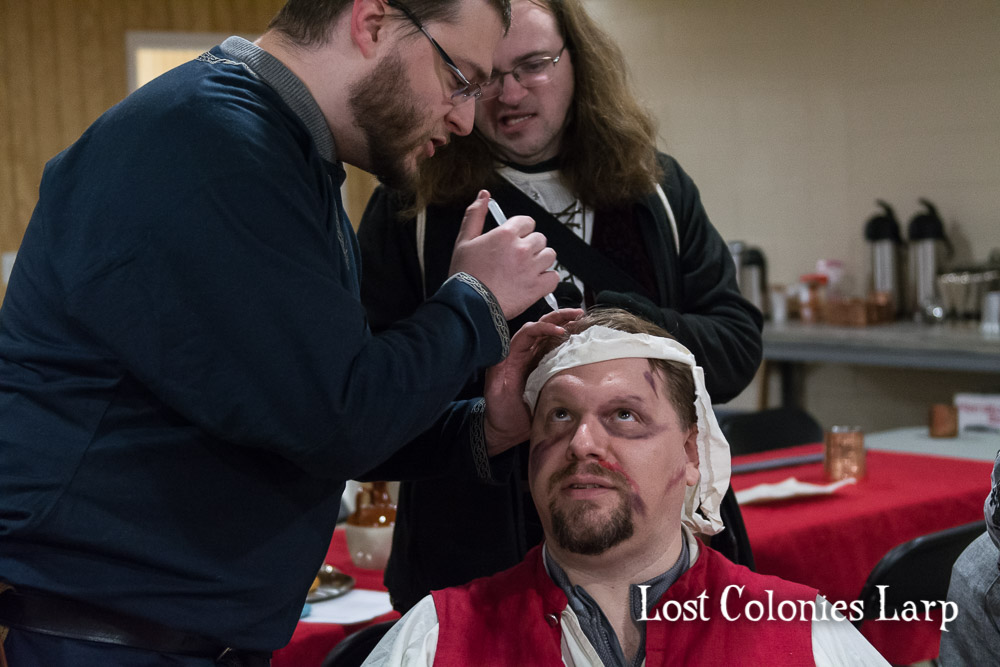 After Jon Cuinn was rescued from his kidnapping he was pretty beat up. The Medicus guild performed trepanation to lower the swelling. 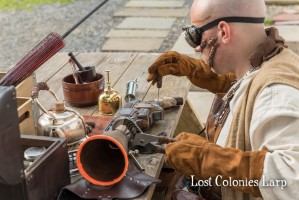 Albrecht can usually be seen around Leyton tinkering on this project or that. He really is quite the alchemist. 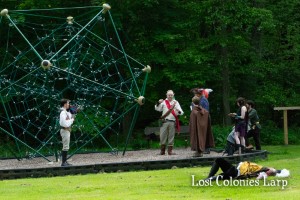 Some call this the "Psionic Esotary" and others just refer to it as "The Device". This was responsible for the disappearance of all the townsfolk from Leyton. 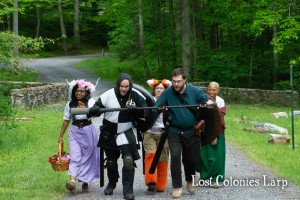 Upon arrival in Leyton, after fighting off the Ahool, several wagons were found to have been stuck in the muck off the side of the road. Nothing a little people power can't solve though. 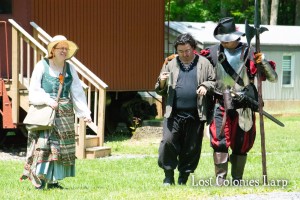 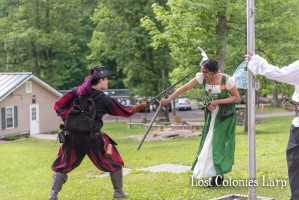 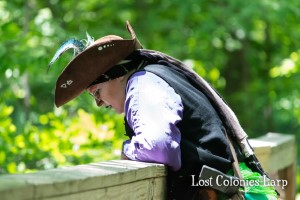 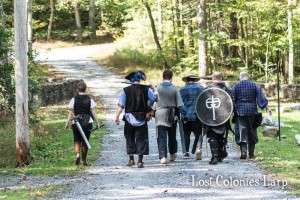 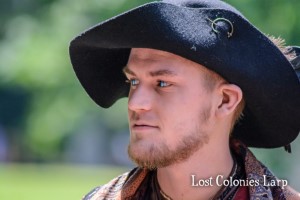 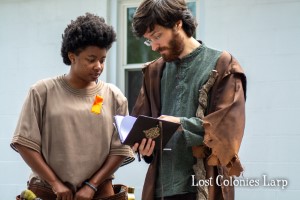 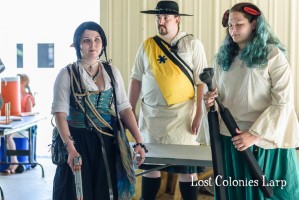 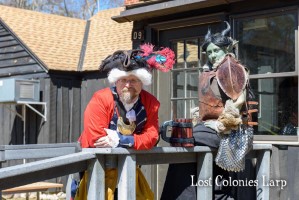 Adjutant Jonathan Rouse Meriott and Field Marshal Urfexa look on as a Ritualist undertakes their testing. 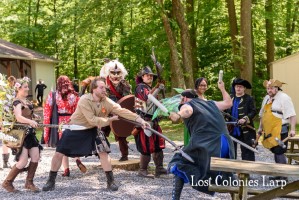 These strong creatures are quite the plague on Leyton. The greater ones require teamwork to bring down. 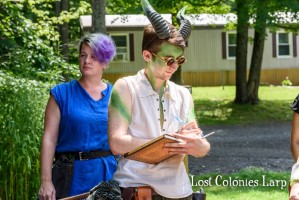 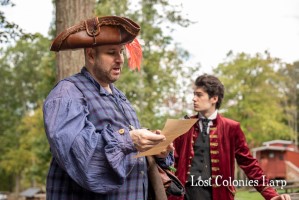 Reads a proclamation aloud to the assembled merchants

Code of Conduct & other Policies

We are an active consent larp, no one will be subjected to unwanted touching, flirting, or aggressive behaviors. All participants may use our lookdown safety mechanic to leave any situation, or utilize the quiet room if they need it.

Safety first! We encourage you to equip yourself appropriately for the outdoors, avoid encounters with wildlife, drink enough water and eat enough food, and to get enough sleep to be able to play safely and return home healthy.

We are an inclusive, LGBTQ+ positive, space celebrating all players of all backgrounds as they are. We have a zero tolerance policy for any kind of malicious or discriminatory behavior.

We respect the names and pronouns that players wish to be called both in and out of game. We encourage wearing pronoun badges by all individuals and recommend asking for pronouns instead of assuming.

We do not allow characters to be named after popular culture references no matter how obscure. Please be original with your names and character designs.

We do not allow griefing and we seek to avoid or minimize un-negotiated player versus player (PvP) activity. No character may be killed as the result of PvP without prior out of game consent.

Life should always come before larp. If you buy a ticket for an event that you are then not able to attend, we will hold that ticket for you for a future event. Simply message us at directors@lostcolonieslarp.com to let us know when you wish to apply it. No explanations required.